Let's do it for the kids : 1) Stick & stitch: the gadget holder project 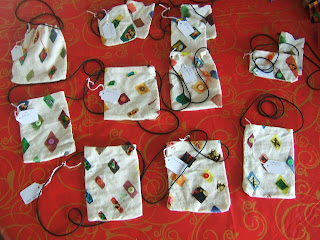 Last year I got involved in a project organised by the African Cultural Association, Barnet: The Youth Multicultural Textiles Arts & Crafts Workshops. It consisted of a series of drop-in workshops aimed at children from 7 to 18 (quite a range!) and mainly based in the borough's libraries.

The task proved both exhausting and rewarding but definitely an experience worth remembering and sharing:
It can give some ideas on 'crafty' things to do/make with children and how to plan any of such activities with them.
The first project I want to talk about is the gadget holder (ideal as a mobile case or i-pod or even a pair of spectacles), which is basically a rectangular shaped container that can be hung around the neck. 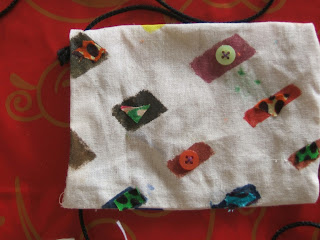 The general brief for the project was to include some kind of textile craft form either traditional or contemporary, drawing on a multicultural context but possibly including some African connection or theme. Obviously there had to be a practical outcome, in terms of artefacts but possibly also in terms of learning (a new skill, technique, etc.)
The idea for this particular workshop came about because I could include fabric (for the textile bit) paint (as some of the children had previously requested something involving a painting activity of some sort) and could accommodate both the needs of children who could sew (and were itching to do so) and children who couldn't or wouldn't, mainly the younger ones, but not necessarily.


It had to be a fairly simple activity as the workshops were becoming increasingly popular and lots of children of different ages would turn up making close supervision a bit more difficult. 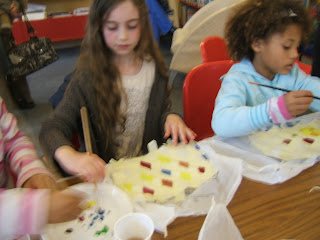 Just as some of the children were intimidated by the use of the needle, some of the others were  nervous at the idea of using paints and brushes. To make the project easy to execute I came up with the idea of using masking tape to make a neatly painted background without too much effort and scope for things to go wrong (the idea developed from one the techniques used with Markal Paint sticks, even though in that case you paint over the masking tape and spread it with a toothbrush). 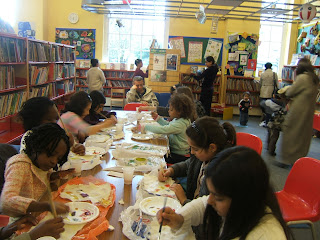 We used primary acrylic colours which even if mixed to become a bit murky would go well with the bits and pieces of the African fabrics that would be added later for further decoration. Each child decided on the design and on the measures and shape of the case. 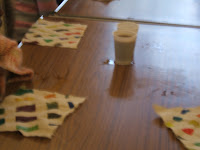 The choice for the main fabric had to be calico: it's strong, doesn't fray  much, it's easy to sew through and reacts well to both paint and glue. So once the off-white calico had been decorated with paint, the rectangles could be folded and there was a choice whether to glue the hems or sew them. 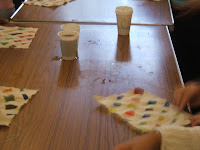 Sewing or gluing the seams was also pretty straightforward, with those wanting to sew getting excited and those not wanting to, enjoying the quick and equally
sturdy results given by the gluing method. 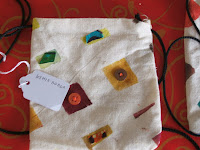 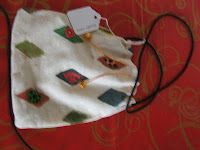 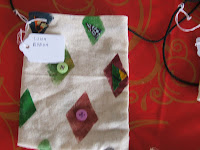 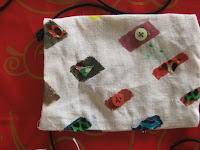 Pieces of African fabric and/or coloured buttons were added, either by gluing or sewing using simple stranded embroidery cotton and the purses were finished off with the addition of a cord (the sides were pierced with an owl and the cord was knotted in place) to allow them to hung from the neck. 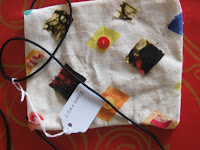 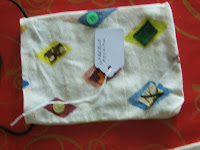 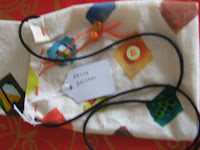 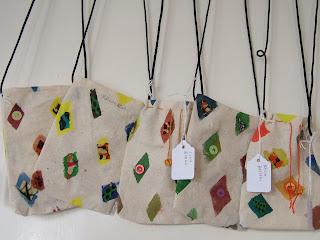 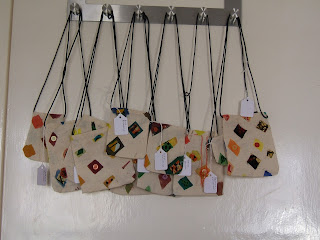 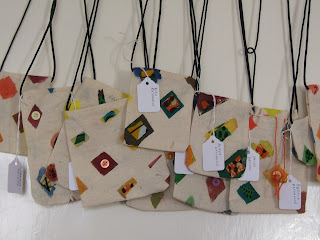 Email ThisBlogThis!Share to TwitterShare to FacebookShare to Pinterest
Labels: The children's projects

This blog is about my endless fascination with the material world and the world of materials. A visual journal that will mainly show the things I make and how they help me make sense of reality. The processes and the stories behind the objects alongside some random and not so random thoughts that link it all together